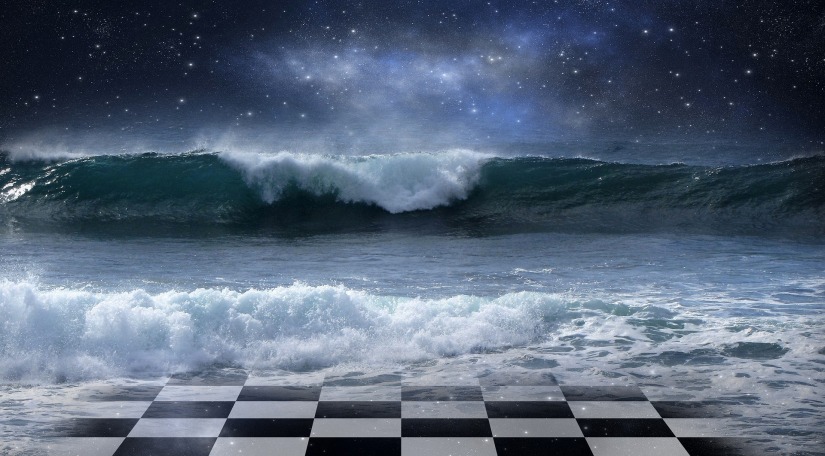 Hello there! I have been away for some now. I am sorry for no being able to read some of your posts but I will try my best to catch up. 😊 Stay safe everyone!

Today I am sharing an old post of mine. I thought it would be apt for International Chess Day which happens to be today. Happy Chess Day to all chess players and enthusiasts!

She stood long entangled in her own tangle of curls, the familiar wretched emotion seeping through her veins. Hatred? Anger? Misery? No! A feeling she knew only too well, one which had slapped her own face. Before her stood two options- the first one with its arms wide open inviting her for tea.

As she watched on, the monstrous waves came racing forward, their wide jaws open, ready to engulf her tender silhouette. But her teary big eyes had once again witnessed the miracle of her own beauty. The crashing ocean demon bewitched by her pulchritude merely steeped down to nudge her toe and request allegiance.

She walked on delirious, into the waves, now retreating into the deep sea. Checkmate! The queen had been sent to E5. All would be over. They retreated to warn her. And as if today was a day of miracles, she stopped.

Not today. She turned around and glided back. She was not a pawn, she was the queen. As the abject memories- the golden laughter flooded into her mind like the waves, she pushed them away – somewhere she would never find again. So much for the game of life she had now abandoned forever. She had chosen her second option. She had chosen wisely.

The King might have been long gone but the Queen was still on the battlefield.

View all posts by Nandika Bansal